Hailing from Portugal, TOXIKULL burst onto the scene fully formed in 2016 with their debut album, Black Sheep. Indeed black sheep amongst the modern metal landscape, the quartet unleashed a fury of classy-yet-OTT speed metal pumped full of thrash overdrive – a sound that, while classically rooted, didn’t conveniently slot itself into one category. Leading the charge were the authoritative vocals of ex-Midnight Priest frontman Lex Thunder, here also playing guitar. But Thunder’s banshee cries weren’t the only arsenal: his bandmates shredded with the best of ‘em, putting considerable chops to good use with cruising-yet-crunchy ease.

A couple EPs followed in 2018, but TOXIKULL really hit a fever pitch with their second album, 2019’s Cursed and Punished. Everything killer about their debut album was magnified tenfold, everyone going for glory and for the throat, delivering unbridled METAL MAYHEM that was simply impossible not to get swept up in! Each element here positively bristled with electricity and urgency – guitars razor-sharp but dynamic, the leads utterly blistering but with also with memorability, the rhythm section pumping like a locomotive on the way to Hell, and of course, Thunder’s vocals reaching new heights of grandeur and…well, height – and all of them were coated in a gleaming production job, courtesy of Miguel Tereso from Demigod Recordings, that sacrificed not ounce of power…in fact, quite the opposite! Through it all, the songwriting was nothing short of stunning; each of these 10 songs could be an anthem itself, and TOXIKULL banged ‘em out in a cool ‘n’ compact 34 minutes, making the listener beg for more.

Looking for a modern answer to old Helstar, Liege Lord, and Jag Panzer but with speed and power to spare? Look no further than TOXIKULL’s Cursed and Punished, at last unleashed on the most perfect format for classic metal: VINYL! 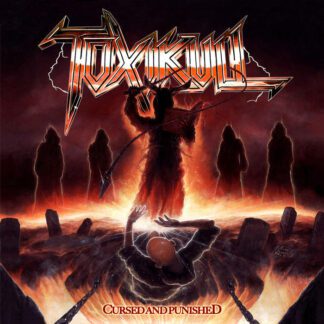 You're viewing: Toxikull – Cursed and Punished 180,00 kr
Add to cart