EISENHAND are a relatively new entity hailing from Austria. The band made their recorded debut in 2018 with the accurately titled Demonstration Tape and followed it with another demo, White Fortress, the following year. During that time, EISENHAND took to the stage, reveling in the raucous experience of live performance, and their two recordings to date ably captured that spirit. And while a couple of members have done time in more overtly black metal-styled bands, EISENHAND’s sound stridently recalls the pre-thrash days of heavy metal: whether the style was early power metal or belatedly-applied epic metal or simply speed metal straight from the garage, subgenre delineations matter not when faced with such stout-hearted bravado and blanching passion.

Thankfully, all that rough-hewn promise and poise spill forth across EISENHAND’s full-length debut, Fires Within. Indeed aptly titled, Fires Within absolutely brims with a fiery authenticity that’s simultaneously ancient and fresh-sounding. Moody in their melodicism, bristling with electricity at every turn, and incredibly dynamic even with their bursting-at-the-seams execution, EISENHAND weave majestic tales of the supernatural and strange that get stuck in your head even when song lengths easily slot into the five-to-nine-minute range. But the seven-track/45-minute Fires Within is simply the format it needs to be, no more and definitely no less: “Steel City Sorcery,” “Dizzying Heights” and the reprised “White Fortress” and “Ancient Symbols” are but some of those tales, each as crucial as the one before and the one to come… All is EPIC here, without being overstated about it – myth and magic and also modesty.

Names invoked include Gotham City, Bashful Alley, earliest Omen, Brocas Helm, Kat, Turbo, Magnesium, or early Slayer, as well labelmates like MEGATON SWORD, SANDSTORM, COLTRE, SOULCASTER and MIDNIGHT PREY, but on evidence of these Fires Within, EISENHAND are already on their way to lighting a new torch! Are you prepared to get burned? 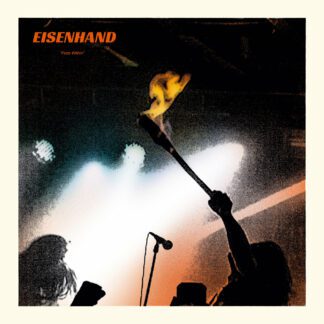 You're viewing: Eisenhand – Fires Within (Cassette) 75,00 kr
Add to cart