Only 1 left in stock

One of the hottest propositions in the UK’s resurgent traditional metal scene, HEAVY SENTENCE have kept the emphasis on quality over quantity since their formation in the mid-2010s. Just like the early days of the NWOBHM, HEAVY SENTENCE made their recorded debut with a two-song 7” in 2017, followed a year later by another two-song 7”. Both graced with stark, gritty, but endearingly basement-level cover art, these two singles evinced an ageless verve and vivacity in stark contrast with the band’s meager years. And yet, HEAVY SENTENCE include among their ranks scene veterans who do or have done time in labelmates AGGRESSIVE PERFECTOR, Wode, Exxxekutioner, Sump, and Wóddréa Mylenstede among others, so perhaps that inherent wisdom should be no surprise…. Either way, with just four songs to their name and a clutch of raucous live gigs, anticipation has been feverish for a full-length.

At last, it arrives bearing the call-to-arms title Bang to Rights. Tight and taut at 10 songs in 37 minutes, HEAVY SENTENCE’s debut album is a well-oiled machine of absolute ANTHEMS destined for classic status. No more but certainly no less, Bang to Rights is everything HEAVY SENTENCE have been since the very beginning: deceptively energetic mid-tempo HEAVY METAL roughened up by the spectre of punk, much like (again) those early days of the NWOBHM. Of course, the band are apt to kick into a gallop from time to time, but the emphasis is always on go-for-the-throat songwriting that only street-walking cheetahs with hearts full of napalm can produce. Of course, Motörhead’s glorious works of the 1980s loom large here – from Iron Fist to Rock ‘n’ Roll, and even Another Perfect Day – but it’s HEAVY SENTENCE’s attitude and charisma which triumph over all. Equally back-alley belligerent and high-adventure fantastical, Bang to Rights is informed by early ‘80s Thin Lizzy as equally as prime Saxon, with HEAVY SENTENCE here continuing the lineal dots connecting Heavy Load, Omen, Lord Weird Slough Feg, and October 31 onward to the metalpunk revolution fostered by Midnight. In short, timeless and eternal and fucking unyielding.

HEAVY SENTENCE is coming your way…‘Cos you are BANG TO RIGHTS! 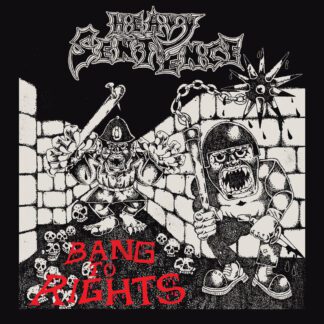