Back in stock, now on black cassette with a newly designed sleeve in dark mode. This second edition also includes a new mix of the bonus tracks, never heard before.

Swedish heavy metal legends Mindless Sinner need no further introduction. This is an official re-release of the band’s groundbreaking debut EP from 1983.  Second edition limited to 300 copies on black tape.

Includes six rare bonus demo tracks (also recorded in 1983)! These tracks are previously only available on the 2003 CD re-release by Metal For Muthas. Tracks 5-9 have been re-mixed specifically for this second pressing!

Released in conspiracy with Turborock Productions, who has designed the incredible layout of this release. 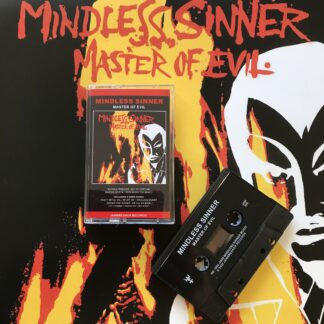