Let’s return 25 years back, to former Yugoslavia. Life wasn’t so bad there at the time, but it was definitely not the place to start a metal band. Closed market, economic and sometimes political obstacles always held Yugoslavian metal scene a few years behind the European one. Bands and their products of that time were not able to compete with foreign ones, but there were some exceptions.

One of them were Sarcasm. They started playing thrash metal only one or two years after it flooded European metal scene. Sarcasm started in 1987, practicing, writing songs, learning how to perform and how to work in the studio. Their enthusiasm and efforts have paid back – their self released debut Crematory was quickly sold out and they played concerts across Yugoslavia, before the crowds that were often counted in 4-digit numbers.

This Crematory re-issue is subtitled Sarcasm Anthology 1987-1994. The release includes Sarcasm material, recorded in their first period of existence: three demo tracks recorded in 1988, Crematory album and another two songs that resulted from the studio session in 1992. This edition also contains previously unpublished photos and liner notes written by the band. 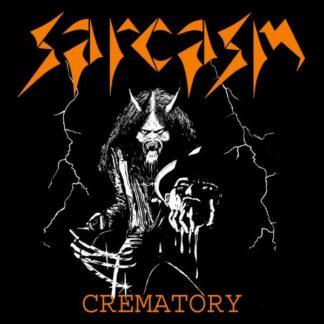