Echoes from the Gutter

Despite forming in 2016, it was not until 2020 when VENATOR made their recorded debut with the EP Paradiser. Nevertheless, the three songs contained therein were an incredibly auspicious first start, showing VENATOR as a band seemingly thawed out from 1983, so authentic and skyward was their songwriting. Wrapped in a uniquely retro-futuristic production, Paradiser pointed the way forward for VENATOR, and the buzz began to build.

Now, that buzz is gonna boil over with the band’s full-length debut, Echoes From the Gutter. Graced with yet another amazingly era-authentic artwork courtesy of frontman Hans Huemer, Echoes From the Gutter takes the melody and moodiness of its no-less-inconsiderable predecessor to uncharted heights (and depths!) of glory, both grimy and gleaming. Right from the record’s very first seconds, VENATOR burst and bristle with an electricity that’s positively, stunningly addicting; ANTHEM after ANTHEM is doled out with almost laissez-faire ease, each hook hoisted heavenly and then brought back down to – yes – the gutter. It’s the kind of album that walks that fine line between street-level and upwardly-mobile, much like heavy metal’s forerunning bands of the early 1980s, when the landscape of conquest from club to stadium was still a special dream. Or, simply submit to the emotive vocals of Huemer, whose heart-on-sleeve clarity commands his bandmates onward, they in kind delivering a truly impassioned performance that encompasses many speeds and many moods, but always with those HOOKS front and center – and fucking GODLY solos! Seriously: the solos here!!!

Anyone pining for the 1983/’84 peak of the likes of Tokyo Blade, Grim Reaper, OZ, Witch Cross, Heavy Load, and even Judas Priest but adding to that hallowed lineage rather than plagiarizing it, you’ve found your new modern classic in VENATOR’s Echoes From the Gutter! 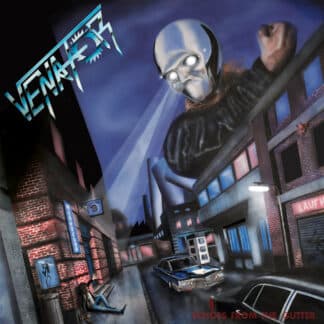 You're viewing: Venator – Echoes from the Gutter (Cassette) 80,00 kr
Add to cart