Formed in 2015, Poland’s GALLOWER wasted no time in recording their first demo, Witch Hunt is On, which was released by Shadow Kingdom Records. A second demo, Through the Gallows, followed a year later, and both demos were re-released together on CD by Under the Tyrant’s Banner.

The next couple years were spent playing gigs, with GALLOWER sharing stages with the likes of Angel Witch, Nifelheim, Satan, Blasphemy, Nocturnal, Attic, Hellish Crossfire, Witching Hour, Division Speed, and more. Finally, in 2019, recordings began in Bestial Sound Studio for their debut album, Behold the Realm of Darkness, which was released in June 2020.

As ever, GALLOWER have stayed true to their power-trio format – Nocturnitier rips the guitar, Speedfire bangs the drums, and Tzar gives his sepulchral voices and bulldozing bass – and they’ve reached something approaching ripping perfection with their latest Eastern Witchcraft EP. With a sound seeking the ultimate revenge and squarely located around 1985 (maybe even 1986), GALLOWER incite a riot of violence that skillfully melds the Teutonic legendry of Destruction, Sodom, Kreator, and Violent Force with the first-wave black magick of Bathory, Hellhammer, Venom, and Japan’s Sabbat. No more but definitely no less, Eastern Witchcraft is a five-song/17-minute spell of destruction sure to entrance diehards and genre borderlanders alike. In particular, GALLOWER at present emit strong vibes of early Bulldozer, Running Wild, Deathrow, and pre-Rick Rubin Slayer.

To restate the obvious, this is a time-warp, and GALLOWER will definitely WARP even the sturdiest minds – this is Eastern Witchcraft! 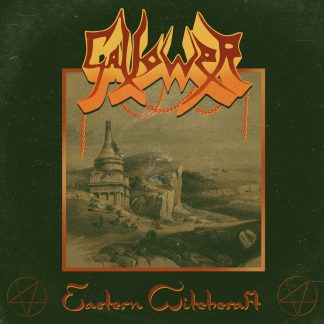