Welcome back Jawbreakers! It is time for another interview, and this time I managed to get hold of Penki “Disembowelman” Samuelsson – usually known for playing old school death metal in both Entrails and Gravestone – to talk about his latest project Facerip. This young band (back then as a power trio) from Växjö, Sweden released their debut four-track demo here on Jawbreaker Records earlier this year. The music sounds like it may have been hidden away deep down underground sometime back in 1987, and now dug up again 30 years later, reeking of radioactivity and dirtier and angrier than anything you ever heard before. It’s speed, it’s thrash, and it’s completely out of control… Let’s get it on!

Tell the readers how and why the band started.

Fucked if I know! I didn’t sign up for this. I wrote one song and asked Nukeromancer to put some nasty witchdemon vocals on it. We uploaded the track to Soundcloud and I thought that would be the end of it. Then Distroyer showed up. He really liked the song and he had some killer riffs laying around, so he basically forced us to put a band together. It all happened so fast that I barely remember recording my parts for the first EP. But hey, it’s one more reason to play fast music and drink beer, so I guess I can live with it!

Do you see Facerip as an active band or more as a fun side-project?

At the moment I would probably call it a side project, but we have yet to explore the possibilities. It may change completely. We do plan on playing shows and go to as many places as we possibly can, but so far there is no telling if it will be a few gigs a year or extensive touring. Only time will tell! 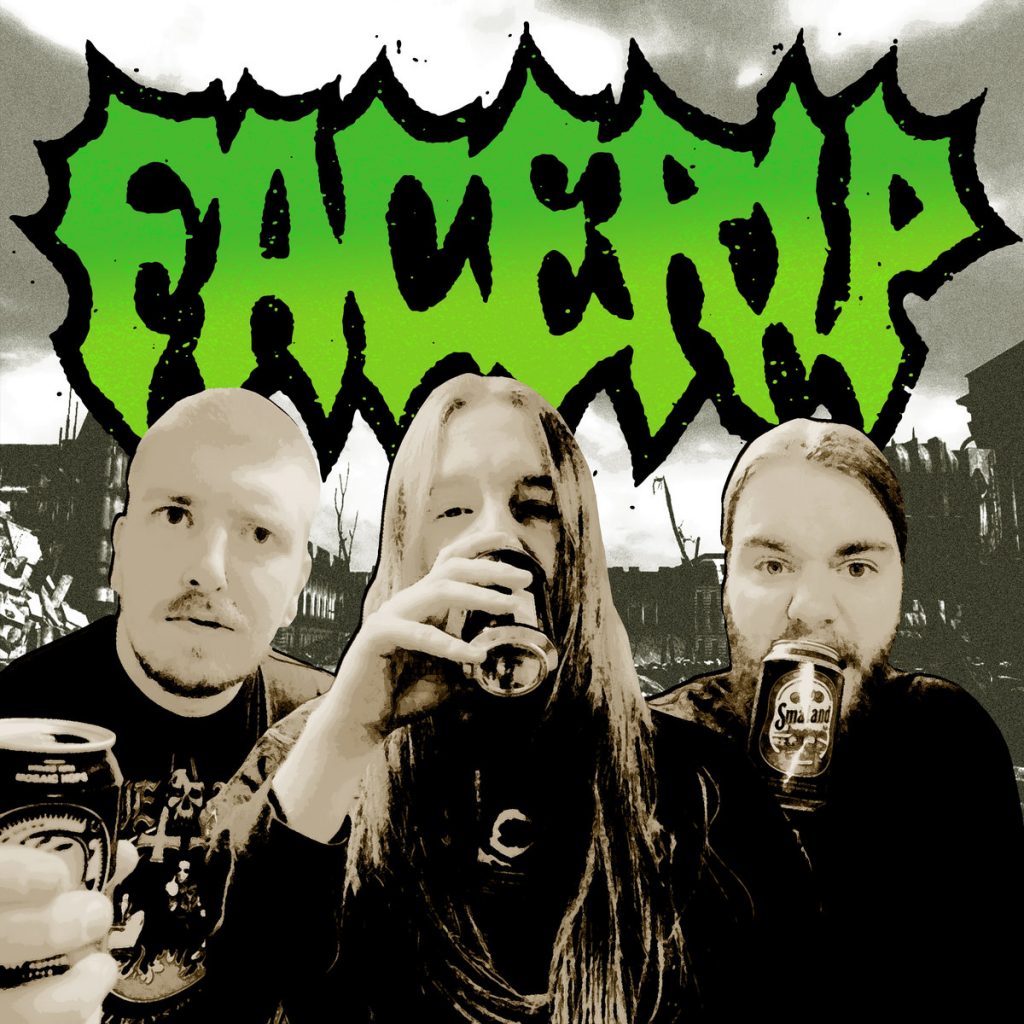 What’s going on in the Facerip camp right now? There has been some reinforcements to the lineup, right?

That’s right! We recruited two new members to the band. Dr. Fill on the drums and Bässripper on bass. We are finally a full-fledged band. There are also some new songs written, new riffs riffed and stupid ideas to turn into reality. We just need to find the time to put everything together. When the time is right, we’ll step back into the studio and record our first LP. Faster and dirtier than ever!

To be honest, I don’t know. Of course I get inspired by the music I listen to, but mostly the inspiration comes out of thin air. All of a sudden I just have to write music or my brain will explode. I can’t explain it. It’s like I wake up with riffs in my head and I can’t go about my day until I get it out of my system.

This answer probably doesn’t make any sense. It’s hard to answer a question when you can’t wrap your head around your own head. And now I made it even more confusing. I hope you’re enjoying this clusterfuck of an interview!

T.F. from Voodus answered something similar when I interviewed him some weeks ago, so I think it makes sense after all. Now, on to the last question; are you still active in your other bands (Entrails, Gravestone and Void)? How does it work to play in so many bands? Why do many people (at least here in Sweden) choose to join multiple bands instead of concentrating on just one?

Entrails and Gravestone are alive and well! Void has been dead for a while. The reason why I play in many bands is not because of creative outlet. For me to say that would clearly be bullshit, since two of my bands basically play the exact same kind of music. For me it’s about people. It’s refreshing to go from one band to another and do the same thing, just with another group of guys.

Balancing three bands is a matter of prioritising, scheduling and respect. If any of those elements goes out of the equation, a band might fall apart. I try to give every band the time and attention it needs, and I almost never run into any trouble. Sometimes you might have to turn down a gig because you were already booked to play with another band, but that’s just something you have to live with. Luckily for me, that has only happened once or twice.

Excellent! I for one really hope for a follow-up to “Radioactive Race”, as well as a chance to see Facerip live in the near future. Meanwhile, you will find the “Radioactive Race” cassette in the webshop. Also check out the following links for more info:

Sign up for the newsletter to get informed when the next interview comes online, and don’t be afraid to leave a comment below. Stay true to heavy metal… in the night!
Leave a Reply Cancel reply