Recently we had the pleasure of interviewing Nonoy Padrejuan, guitarist/vocalist from Paganfire. Hailing from Quezon City, Philippines, Paganfire has been wreaking fear and death for the last 15 years. True underground warriors to the core, the band has never been taking it easy or waited for success to suddenly come knocking on their door. Instead they have been collaborating with countless labels and bands from around the globe, spreading forth their brutal thrash metal like a horde of plague-ridden black rats.

Paganfire has been active since 2003. Tell us how the band got started!

N: Greetings mate!!! Actually me and Jay [Drums] got together in 1999, under a different name, playing covers of our favorite bands. After 2 years, our then bassist/vocalist Dennis thought of the name PAGANFIRE, and we used it since then. Come 2002, Alvaro [bass/vocals] and Rowell [guitars] stepped in, and we played around the Metro Manila area actively. It was 2008 when Rowell got replaced by M.A. and from then there was no turning back!!

Judging from Metal Archives, you guys have released only one full length album [2013’s Wreaking Fear and Death], but an extreme number of splits and other releases. How come? Do you even keep count of them?

N: Apparently it took us quite a while before we managed to do the debut album, we are not on a rush anyway, and right now the 2nd album’s creation is slowing down too, but no worries, we are keen on working on it a lot sooner. There was no conscious action to flood the world with splits, it just happened, WRITE, RECORD, RELEASE, D.I.Y. or die!! Let’s just say we never backed down from any project proposal, it is always a pleasure to work with fellow maniacs from everywhere anytime! NO, I haven’t counted them lately, perhaps when I update my list, but for now, the barrage will continue. BARRAGE OF NOISE!!!

How does your song writing process usually take place?

N: There is no definite time frame when we work on a song(s), some just take a few hours and sessions of rehearsals, while others are way too hard to finalize. Normally it’s either me or Alvaro who presents a new song or two at rehearsals, and from then we work on it, letting the METAL flow naturally, jam and bang our heads to it. That’s the way we do it, and let’s see if it will change sooner or later.

To my ears, your music sounds like thrash metal of the most extreme kind – a bit like Sadus, Hypnosia or early Kreator. How would you describe your own music? What are your influences?

N: AARRGGHHH!!! I am glad you are reminded of such legends with what we do! Paganfire plays true underground thrashing metal, no more, no less. Bare, raw and filthy thrash metal!!! As a band we are into thrash, heavy metal and punk, as individuals musical influences are many! And it is indeed excellent that we have a common area of interest and that is thrash metal! Other non musical influences would be movies, books and the fact that we are living in a third world country that will swallow itself whole very soon!!

What kind of books and/or movies is that?

N: Practically we read and watch a little bit of everything, but most of the time it is the horror/occult movies and books that stand out, and of course the biographies of some interesting personas like dictators, serial killers, criminals, despots etc etc.

Tell us more about the situation in the Philippines in general.

N: The Philippines is in a near self destructive state, I think it is just a matter of time before everything spills over, ravaged by politicians and their self appeasing ways. I bet you have read about the thousands killed by the useless drug war, the endless political bickerings, social media propagandists, and now our soaring inflation rates. Would you believe we have third world wages against first world prices?? Our president is a lunatic to say the least. In general, the Philippines is in a poor, zombified state. Now we’ll see what the future will bring.

How’s the metal scene over there?

N: I cannot call it a “scene”, it was always a group of individuals whose activities resemble a “scene” to me. Sure enough you have the standard (bands, zines, maniacs) which is not totally a bad thing, but I want more, more hardcore metal maniacs, more controversial zines, more hyperactive non trendy bands, etc etc. Perhaps we can say I don’t like the scene? Whatever!! Whatever works for them, as far as Pagafire we’ll just walk our own path and do our thing, regardless of what is happening or is popular to do in this “scene”.

With several new releases coming each year usually, you don’t seem like a band who like to sit still. What’s next for Paganfire? Total world domination?

N: Kudos to you for noticing that!!! We can say that we are very active indeed, as I reply to this interview, we just did a pair of weekend shows in my hometown, we went 500 kilometers from Manila, and it was a worthwhile experience to say the least, and we are now planning the next shows. If somehow the possibility of touring Europe and other continents happens we’ll gladly do that, but as of now, none of that will happen soon. As for the release onslaught, keep your eyes and ears open, as I have been informed that the test presses for the next vinyl release will be ready and some months ago our friends from Brazil’s VDM productions vomited forth their version of our debut album “Wreaking Fear and Death” with different layout and bonus tracks of course! And yes, as far as I am concerned that is what a true D.I.Y. underground band should do: write, record and release!!!

Jawbreaker Records would like to thank Nonoy and Paganfire for the interview, and give our eternal respect for their dedication! This is the true spirit of the underground, this is the way it should be done – WRITE, RECORD, RELEASE!

Sign up for the newsletter to get informed when the next interview comes online, and don’t be afraid to leave a comment below. Stay true to heavy metal… in the night!

Jawbreaker Records are extremely proud to announce that Mindless Sinner – Master of Evil is now officially released. Shipping of all the pre-orders (thanks everyone!) has already begun, and for the rest of you: now is the chance to lay your hands on this masterpiece of Swedish heavy metal history. For a limited time only, both the yellow (limited to 100 copies) and the red (limited to 200 copies) will be available in the web shop for a special heavy metal price of 66,6 SEK.

It’s hard to believe, but remember that this is the first time EVER that ANYTHING by Mindless Sinner is officially released on cassette! So hurry up and get your copy while the stock lasts. 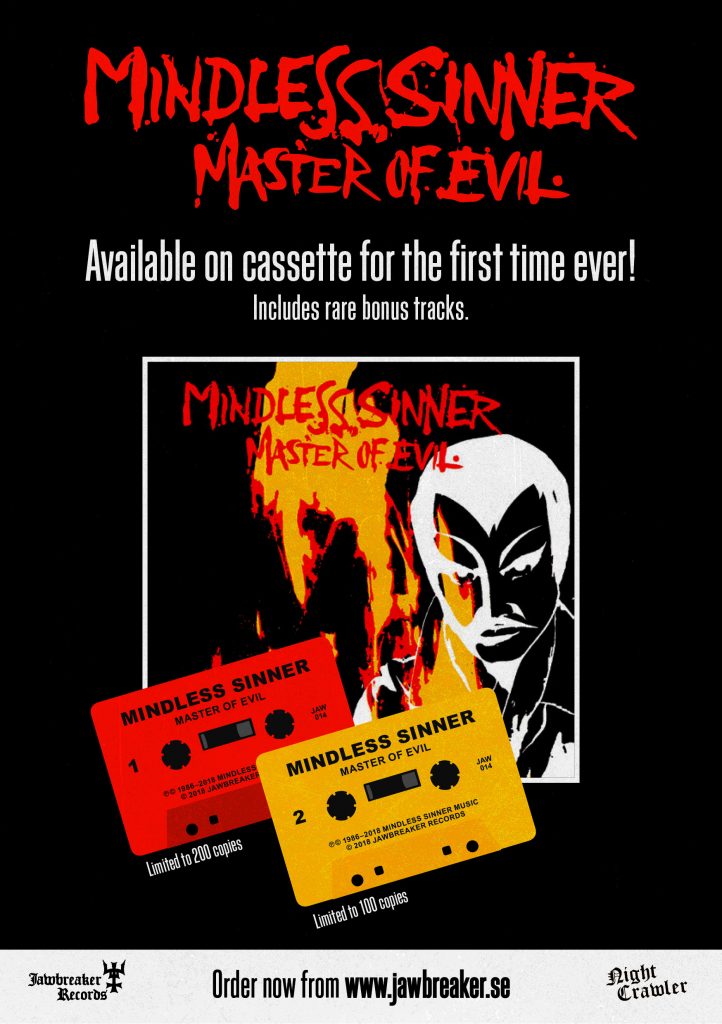